Luxury Roan campsites for the entire family on the Atlantic Coast

Beautiful campsites on the Atlantic Coast

On the Atlantic Coast you’ll find many lovely and well-maintained (family)campsites. How wonderful: it’s just a hop skip and a jump from your tent or mobile home to the ocean. But the campsite itself also has plenty to offer.

In the Pine forest of Les Landes, close to the Pyrenees and the Spanish border, you’ll find campsite Le Vieux Port, a lively 5-star campsite with a 7000 m2 aqua park, 7 swimming pools and a fun animation programme. You walk onto the wide sandy beach through the campsite’s own beach access. Campsite La Dune des Sables is situated in the middle of a dune area. This 5-star campsite is also located directly onto a sandy beach and has a fun swimming pool with slides. At 2,5 kilometres distance you will find the fishing village of Les Sables d’Olonne, which has as many hours of sun as the Côte d’Azur. There’s something for everyone. 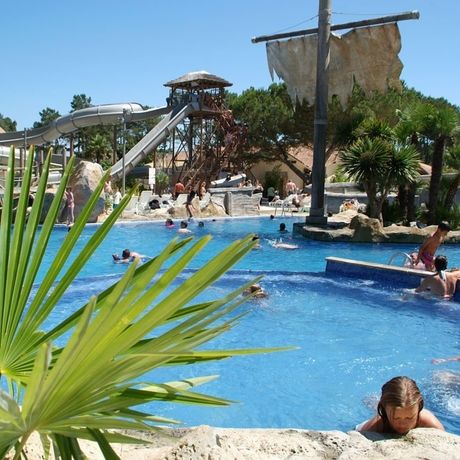 Activities on the Atlantic Coast

The big advantage of a holiday on the Atlantic Coast: the ocean is never far. With its wide sandy beaches, idyllic harbour towns and beautiful nature everyone will enjoy themselves on the West coast of France. You should really go and see the extraordinary white cliffs of Étretat – if possible go at sunrise for a beautiful picture. We can also recommend the harbour town of Le Havre in Normandy: its modern architecture is part of UNESCO’s world heritage list.

The Atlantic Coast knows more beautiful cities like Honfleur, Saint-Malo and La Rochelle. Also definitely visit Le Mont-Saint-Michel, the world famous tidal island. The island’s city is also known as ‘the miracle of the west’. In the more Northern regions the ocean can be rough, but further South you will find freshwater lakes on the coast.

The climate on the Atlantic Coast

Because of how big France is, the climate varies per region. The West coast has a more moderate climate than the middle of France does: the summers are cooler and the winters are milder. This so-called sea climate is comparable to that of The Netherlands.

Book a lovely holiday on the Atlantic Coast and enjoy yourself on a Roan campsite.

Your web browser is not supported. Update your browser for more security, speed and the best experience on this site.